Rumble — When the Stew Peters Show interviewed Dr. Sherri Tenpenny last summer it was one of our most viewed segments ever. The “Voice of Reason ” on vaccines and current events was back on with Stew Peters Thursday to pillory the shot goblins dishing out medical killery on pureblood patients, creating a new American ‘killing fields.’ Dr. Tenpenny has been attacked for challenging the untested and failed protocols that have been put into practice by doctors who worship Anthony Fauci. In Ohio, her enemies came after her medical license, and slandered her reputation. But this has not scared her off, and she advises that all caregivers grow a spine and stare down the authorities who are recommending treatment strategies which are killing people. Dr. Sherri Tenpenny joins us on the show now.

And, Trudeau has left town and is hiding…. 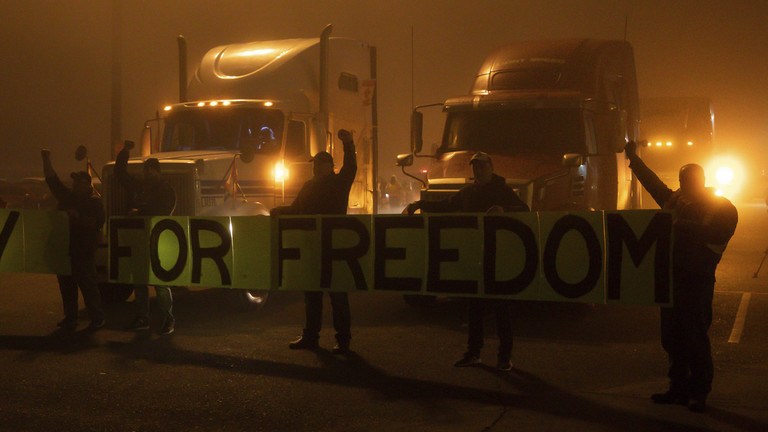 US crowdfunding platform GoFundMe has suspended access to more than Can$5 million (about $4 million) raised by ‘Freedom Convoy 2022’ – a trucker convoy heading to Ottawa to protest the vaccine mandate.

About 50,000 trucks aim to take part in a massive demonstration against rules recently imposed by the government, requiring truck drivers to be vaccinated to avoid a 14-day quarantine after crossing the border from the US.

Commenting on its decision to temporarily freeze the funds raised by the campaign, GoFundMe said the money “will be safely held” until the Freedom Convoy provides the documents “about how funds will be properly distributed.”

“We require that fundraisers be transparent about the flow of funds and have a clear plan for how those funds will be spent. In this case, we are in touch with the organizer to verify that information,” the platform’s spokeswoman, Rachel Hollis, told CTV News in an email.

According to the campaign’s page on GoFundMe, the funds were supposed to cover “the costs of fuel first, and hopefully food and lodgings” for the haulers to “ease the pressures” of their “arduous task.”

Planned and orchestrated as part of the Great Reset Depopulation Agenda

Rumble — In this worldwide exclusive, Dr. Jane Ruby meets with board-certified Embalmer and funeral Director, Richard Hirschman who reveals, for the first time ever, arteries and veins filled with unnatural blood clot combinations with strange fibrous materials that are completely filling the vascular system. Many of the victims reportedly died of heart attacks and strokes. Mr. Hirschman reports that he found resistance when he tried to embalm these jabbed patients, and then found these strange materials and pulled them from the large vessels of the bodies. He also reported that he has gone from seeing 50% of his embalmed cases with these types of blockages rise to almost 80%.

Rumble — Welcome to The Master’s Voice End Times Prophecy Blog: (Hear the words of the Lord).

Today’s word: Barack Obama will return to power. In his day the church will be greatly diminished, many will fall under his vicious style of government. God will purify His people and bring many home, but those who remain will be strengthened through persecution into an iron breed of pure Christianity. A Harvest of new believers will flow into the church but many who confessed Christ will fall away. “Obama will rise among you, says the Lord, you will see it with your own eyes. He will destroy greatly among you, you shall see it with your own eyes.” This is the word of the Lord, let us seek His face for understanding.

“If the iron be blunt, and he do not whet the edge, then must he put to more strength: but wisdom is profitable to direct.”- Ecclesiastes 10:10 In other words; If the blade you use becomes dull yet you do not sharpen its edge, you will have to work harder to accomplish the same task. But a man of wisdom will find success. A few words of caution about what voices we follow, about flies that spoil the ointment, about future events and the ultimate end of each one of us based on the lifestyle we keep. Every choice will be measured back to us- in full. May God direct His true church.