‘And as for you, O My flock, thus saith the Lord God: Behold, I judge between cattle and cattle, between the rams and the he goats.

20 “‘Therefore thus saith the Lord God unto them: Behold I, even I, will judge between the fat cattle and between the lean cattle.

21 Because ye have thrust with side and with shoulder, and pushed all the diseased with your horns till ye have scattered them abroad,

22 therefore will I save My flock, and they shall no more be a prey; and I will judge between cattle and cattle.

When the Lord finishes judging the Fat, disobedient shepherds, He turns His attention to the flock, and proceeds to lay into them and call out the differences and injustices amongst them, according to their doings. “And as for you, O my flock, thus saith the Lord God”……,….The Lord makes a distinction between them calling some rams, and some of them he-goats. I would venture to say the he-goats are the “tares” in the Lord’s flock. He-goats are smelly, obstinate creatures known to eat anything, (and believe anything), and can be mean as well, attacking and fighting others.. They shouldn’t even be allowed in the flock. Remember, the Lord Jesus never told Peter, or His church to feed His goats. He said, “Feed my sheep”, those that belonged to Him…….

The fat head strong rams are there bullying, abusing and lording it over the milder, gentler sheep of the flock.

We’ve seen these bully types in the church, who always seem to be next in line to the pastor perhaps holding leadership positions, such as “elder” or “deacon”, have more money and influence and often times sitting on the board. They also tend to butt sheep away from the shepherd when they get too close, because bully rams want to have the preeminence.

According to the Lord’s description of the rams and he-goats, they have selfishly taken the best for themselves and not ministered to the needs of the weaker sheep and lambs in the flock, but have pushed them aside and possibly even out of the flock to fend for themselves, much like one of the troublemakers Apostle Paul had to deal with..

I wrote something to the church; but Diotrephes, who loves to be first among them, does not accept what we say. 10For this reason, if I come, I will call attention to his deeds which he does, unjustly accusing us with wicked words; and not satisfied with this, he himself does not receive the brethren, either, and he forbids those who desire to do so and puts them out of the church. 3 John 1: 9-10

That’s the bad news…the good news is the the Lord said He was going to remedy this situation. Apostle Paul knew the Truth, that the Lord Jesus is the Head of the Body of Christ, not those who set themselves up to be somebody and rule over the flock with manipulation, demanding to be the ones served and catered to….Apostle Paul resisted these types of hirelings, bullies and tares in the Church, and we should as well by not supporting them, or even participating in their leaven. The Lord Jesus has given us every means to know His gospel and how to learn, mature and serve Him.

Seven things God told Lester Sumrall would come to pass in America back in 1987, and now, in 2015, these things have absolutely come to pass just as He said! Some may say this is “spreading fear”, but God told Lester Sumrall to warn them! Keeping people in the dark about the things coming to pass in America…. is not loving them, it’s deceiving them, and keeping them complacent so they don’t prepare themselves spiritually for the days ahead. The LORD, in his love for mankind has left plenty of warning in His Word, but unfortunately, not all have read it, and some of those who have read it, have either forgotten it, or paid scarce attention to it.  Jesus rebuked the Pharisees, the religious folks in his day, of not recognizing the signs of the times.

This is what the organized denominational church has become.

My Dreams and Visions

I had another dream about sheep, 01/15/2013. In this dream I saw what looked like a stagecoach only it was huge and unlike any I’ve ever seen before. On the side of the stagecoach I saw in very big letters the word “ministry” written. I then saw a driver sitting on top of the stagecoach holding the reins and a very large whip which he was cracking . Here comes the strange part. Every time I’ve ever seen a stage-coach it’s either being pulled by mules or horses. The animals that were used to pull and keep this stagecoach called ministry going were sheep. As I saw the driver cracking the whip over the sheep’s head to keep them moving, I noticed armed mounted horsemen who also had whips on either side of the sheep to keep them in line. In one sense they were protecting the sheep from wolves…

Catholics filled Westminster Cathedral on Saturday to venerate the relics of St Anthony of Padua.

A British woman hold hands with a golden statues, and pray before a piece of rotten human flesh.

The arrival of the saint’s relics, which comprised a small piece of petrified flesh and a layer of skin from the saint’s cheek, was part of a UK tour marking the 750th anniversary of the discovery of St Anthony’s incorrupt tongue. 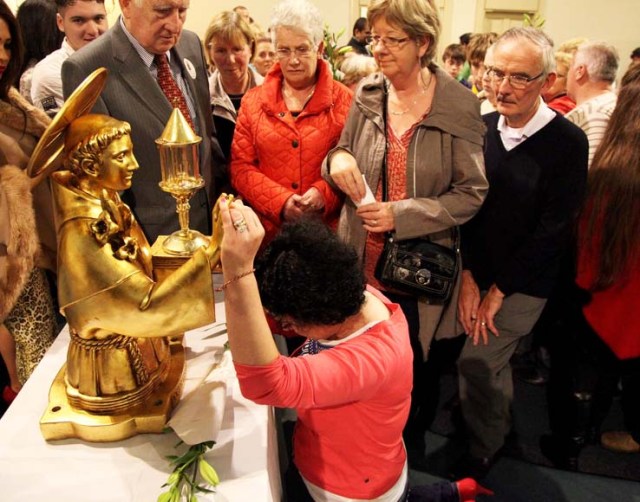 Bowing in religious worship before a statue of gold and a piece of flesh. 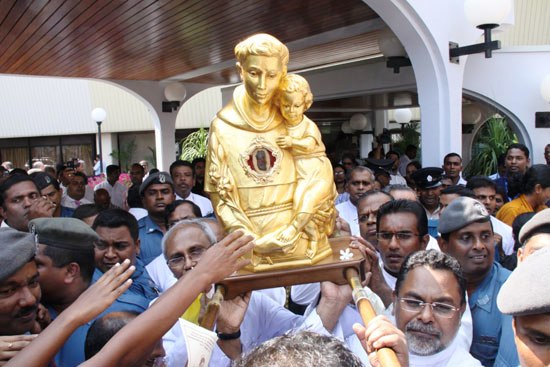 Roman Catholics in Stri Lanka carrying the rotten tongue on their shoulders.

It is estimated that the relics have attracted 250,000 people across the UK during their tour.

A small demonstration by these adorable 10 mo old twins about the fallen nature of mankind, including covetousness, anger, screaming, grabbing, and feet kicking hissy fits in order to get what the other one has. Proof you don’t have to teach kids these kinds of behavior; it comes altogether too naturally. In the adult spiritually unregenerated man, this type of behavior “usually” becomes more refined, as is the case in many politicians,  marriages and some church leaders…you name it. 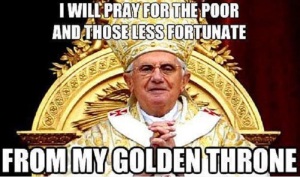 ~All Power Tends to Corrupt and Absolute Power Corrupts Absolutely~

“But Jesus called them to him and said, “You know that the rulers of the Gentiles lord it over them, and their great ones exercise authority over them. It shall not be so among you. But whoever would be great among you must be your servant, and whoever would be first among you must be your slave, even as the Son of Man came not to be served but to serve, and lto give his life as a ransom for many.” Matthew 20-27

The trap the “mystics” fell into was they made their personal experience with God the ultimate goal of their life, and hence, unwittingly, put self at the center and became self-serving. Many modern charismatics have fallen into the same deception.

There are a lot of things I could say about this blasphemous display mocking the holiness of the Lord Jesus Christ, His Gospel and the precious Holy Spirit…………………. none of it would be good! These three “disciples” of John Crowder remind me of the “Three Stooges”. I could easily imagine one of them saying, “Nyuk nyuk nyuk”. 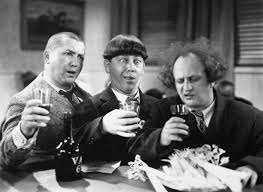 Please don’t send me mail telling me I’m “judging”. I already know that…and I don’t care! It may be dirty work and I don’t enjoy it but somebody needs to rebuke this stuff.

Truly born again spirit-baptised  Christians know this is a hideous travesty of the gospel of the Lord Jesus Christ, but there are many who have bought into this lying, deceiving spirit promoted by John Crowder, the false teacher of the so-called “New Mystics”.

I would urge anyone following John Crowder and his false teachings to run like your hair is on fire. Whatever “anointing” you think was imparted to you, was not imparted by the true Holy Spirit of Yahweh, the Most High God, the Creator of all.