“What’s Wrong With You People?
The present church system has contributed greatly to forming a system of fear and dependency within a closed system of logic where the “laity” has no way to exchange dialogue with the “clergy” relative to evaluation of biblical truth. The saints simply sit and listen and are spoon-fed bits and pieces of doctrine at the whim of the pastor-“king”or his representative. Bits and pieces that may or may not be scriptural truth. With the addition of a pseudo-“tithe” system to finance whatever they can dream of in order to build their personal kingdom the control noose tightens. The addition of the false teachings of the necessity of a “covering” in order to have an umbrella of protection of the pastor-“king”and his corporate structure of cookie-cutter saints further tightens the control noose.
And so the saints become bond-slaves to a man-made system of human works, rather…

Friends, I believe with all my heart, our instruction should be first and foremost anchored in the Word of God, the Holy Scriptures, with the Holy Spirit, not man, as our teacher. But, it is scriptural that prophecy, (as the spoken word of God),  is according to the will of God in His word,  as is still valid for today. Of course, we must test these things according to the Word and by scripture. And if it’s out of line, reject it. However, God does still work in the realm of the Spirit and supernatural. And we do need to hear him, for guidance in these present dark days. Jesus said, “My sheep hear my voice”. If he didn’t still speak to us then how could we hear his voice?” Really, personal prophecies, His spoken word, spoken forth, by God’s gifted people, has ministered to me through many times of…

I have recently made contact with a dear old friend of many years that I’d lost track of since I moved to a different state. She and her adult son had just moved into a Mobile Home and park, pooling their limited money to make the first payment and utility deposit. This was the first real home they’ve had in many years due to a series of serious illness, misadventures, trials, and tribulations.

I found out that they had absolutely no food in the kitchen, nothing in the pantry. or fridge. Since they had been living with a relative there was no condiments; things like flour, sugar, tea, spices, etc. I knew poverty had been  like a black cloud hovering over both their lives for years. There had been many times when they’d both moved in with me, like the time Karen first left her husband due to his adultery and physical abuse. This time, their need and their hunger was immediate and urgent.

I have come to accept Karen’s personality and what the “church” would call her short comings, (spiritual failures) but have come to realize she has more humility, forgiveness and love for the Lord Jesus…….. and everyone else, than the legalistic, self righteous, judgmental leadership of the old church we both started in and later came out of.

However, I emailed an SOS to a sister in that church and asked if they could help Karen and her son have some food. I heard later that the main female pillar in the church came by with some items in the churches “food pantry”. She kind of lamely apologized and said the church has declined, (that was true) and “didn’t have much”. She gave Karen and her diabetic son 4 boxes of mac cheese, 1 can of Carnation milk, box of oatmeal, 1 small sack of dried beans, and a few cans of vegetables. But nothing they could put together a meal with. No bread, fresh milk, bread, butter, vegetables, or meat, etc. However, their “tithes” still go to keep that old falling apart bird cage going with only 9 adults and 3 kids attending.

I received an email the next day from the church sister, saying “they were glad they could help Karen with the food, And that Jesus would provide for them”. And yes of course he does. But not through that bunch of churchy folks. I was even more disappointed in that place than I had been when I left. In any case, the next day an itinerant preacher came by and furnished a Mexican restaurant meal for Joshua and some take out for Karen. Joshua got a decent paying job a few blocks away. And Karen may get a few hours a day at the same place that will allow for her disabilities.

The Lord Jesus gave me this scripture explaining what had happened:

“ What use is it, my brethren, if someone says he has faith but he has no works? Can that faith save him? If a brother or sister is without clothing and in need of daily food, and one of you says to them, “Go in peace, be warmed and be filled,” and yet you do not give them what is necessary for their body, what use is that? Even so faith, if it has no works, is dead, being by itself”.James 2 14-16

More on this particular church later. It was my education in the Lord how Nicolaitanism works against Christians.

Eight reasons for why no true follower of Jesus can accept the head of the Vatican. 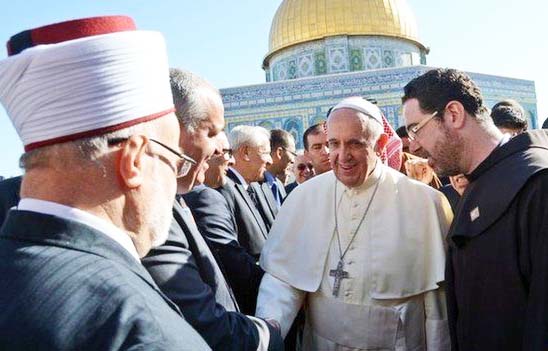 The Pope pray with, support and indulge with the enemies of God of the Bible. Here the pontiff is greeting the Muslim occupiers of the Temple Mount in Jerusalem.

To find out who is a Christian, you need to follow the instruction of Jesus the Messiah. He warned us that it is not enough to listen to what people say about Him. But examine if they do what He has told them to do. Not setting His commands a side for human made philosophy and doctrines. But rather being willing to obey His commands.

By their fruits, we can recognize who is a follower of Jesus the Messiah.

Matthew: 7:15-16.
“Watch out for false prophets. They come to you in sheep’s clothing, but inwardly they are ferocious wolves. By their fruit you…

My Dreams and Visions

First and foremost sunglasses are something one wears by choice. 8n this vision I can honestly say that I have never seen anything like what these people were wearing. It was like they chose not to see. I remember that the sun was also shining brightly in my vision.

Secondly these people needed a blind person’s walking cane in…