Voice of the Martyrs, the Plot Thickens and the Scandal Continues to Unfold- as scandals tend to do 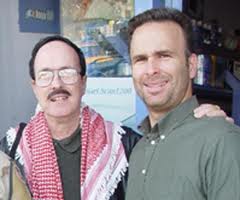 Recognize this guy on the left? This is Tom White, now deceased, the former director of Voice of the Martyrs, United States Headquarters in Bartlesville, Oklahoma. Tom committed suicide after being implicated in the molestation of a young 10 yr old relative.

Why the dyed mustache and hair in the above picture? That’s what we’d like to know, as well as a lot of other mysterious unanswered questions about Tom.

This pic of Tom White, above, was taken during a tour of Iran and Iraq in the mid 80’s

This is Tom White too aka Roland Lamb….out of disguise. You would never tend to think of a nerdy looking fellow like Tom White to be a pedophile, but looks can be deceiving.

The following comment and information was sent to me by an individual on this post ,https://spiritualabusesanctuary.wordpress.com/2016/04/18/richard-wurmbrand-false-prophet-2/ in the comment section,  who obviously has taken the time to do some research regarding some of the things that Voice of the Martyrs has kept out of the public venue. I personally prefer ministries to be transparent in their dealings with the public, especially when said public happens to be Christians who are supporting ministries with their hard earned donations.

“Police records in Washington County OK indicate that Tom White had been caught and identified as a peeping tom in years past.

Walter Thomas White legally changed his name to Rolland Lamb administered by a judge in Washington county. Before 9/11, Tom traveled internationally under both names.

Tom often traveled alone for weeks at a time without checking in at work or home.

Tom confessed to his predatory actions before his suicide. The allegations that led to his suicide were against a family member.

Images of young latin american girls with lolly pops and skype accounts were found on his laptop before being wiped.

His body was found by a VOM employee. The body and items found around the body were altered by VOM employees under the direction of VOM executives before police arrived. Evidence was removed.

The death certificate on record was issued under the name of Walter Thomas White and not Rolland Lamb. Was debt or assets ever accumulated in the name of Rolland Lamb? Were crimes ever committed under that name? Was insurance fraud committed?

Still so so much secrecy and no transparency from an organization that has a $55-$60 million budget annually. International staff fly first class on their way to “minister” to those with nothing but Faith.”

Scarlett Note: Hopefully there will be more information on this forthcoming in the days ahead.

More on Tom White in the link below from a couple years ago: