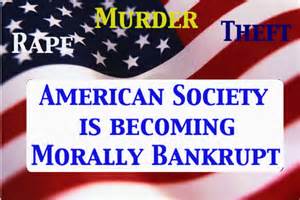 I’d pretty much have to agree with this from what I see going on in the world today. How are some of these American’s coping with their “issues”? Besides a lot of weird psychotropic drugs, a lot of them turn to “therapists”, and to make sure they even have therapy at home, acquire a “therapy dog”, cat, or whatever. And if their not comfortable leaving their therapy dog at home, will take it shopping in the grocery cart. Folks, sane people just don’t do things like this.

There are books and teachings going around telling those in the Body of Christ that they need to repent and pray to restore America to something that would be more like 1956 rather than 1776. Many quote 2 Chron 7:14 but that passage applies only to Israel (find out why). The big rage in some circles is “The Harbinger” book, as if God is behind the falsehoods presented therein to get Americans that have rejected Him to repent.  Some Christians obviously are confused by the bad theology that is going around, so let me try to clarify things a bit. The passage of scripture that Christians should be quoting that fittingly applies to America and much of the world is the following:

Rom 1:21  Because that, when they knew God, they glorified him not as God, neither were thankful; but became vain in their imaginations, and their foolish heart was darkened.
22  Professing themselves to be wise, they became fools,
23  And changed the glory of the uncorruptible God into an image made like to corruptible man, and to birds, and fourfooted beasts, and creeping things.
24  Wherefore God also gave them up to uncleanness through the lusts of their own hearts, to dishonour their own bodies between themselves:
25  Who changed the truth of God into a lie, and worshipped and served the creature more than the Creator, who is blessed for ever. Amen.
26  For this cause God gave them up unto vile affections: for even their women did change the natural use into that which is against nature:
27  And likewise also the men, leaving the natural use of the woman, burned in their lust one toward another; men with men working that which is unseemly, and receiving in themselves that recompence of their error which was meet.
28  And even as they did not like to retain God in their knowledge, God gave them over to a reprobate mind, to do those things which are not convenient;
29  Being filled with all unrighteousness, fornication, wickedness, covetousness, maliciousness; full of envy, murder, debate, deceit, malignity; whisperers,
30  Backbiters, haters of God, despiteful, proud, boasters, inventors of evil things, disobedient to parents,
31  Without understanding, covenantbreakers, without natural affection, implacable, unmerciful:
32  Who knowing the judgment of God, that they which commit such things are worthy of death, not only do the same, but have pleasure in them that do them.

This passage totally explains what is happening in America. Many in America do not want to retain God in their knowledge so God gave many Americans over to a reprobate mind to do those things that are not convenient….(for any moral civil society).

As long as most in America want nothing to do with God there is no hope for any change for the better in America. Praying for those willfully rejecting the knowledge of God is not going to make these people repent. Since they choose not to retain the knowledge of God they can no longer make sane choices based on anything that God reveals in His creation or in His written word.

Those given over to a reprobate mind have minds that are devoid of good judgment. They continually chose evil and deceive themselves into believing their evil is good. Poole said in his commentary:

They were not given up to this reprobate mind all at once, but by degrees. First, they were given up to their own hearts’ lusts, #Ro 1:24; then, to vile affections, #Ro 1:26; and then, lastly, to a mind void of judgment; to such an evil habit, that they could do nothing but evil.

Romans 1:24 is where many are at in this country now. The only remedy is people believing the gospel that unfortunately they have no God-consciousness remaining to accept. Obviously then, once people reach the point of exhibiting their reprobate minds for all to see, there is little hope of ever changing their minds. Praying for these people to repent is much like expecting that your prayers can sway those that have already made the deliberate choice to reject God.

The list showing that America is becoming a nation of reprobate minds can be almost as endless as our news headlines. If you agree, don’t worry so much about some specific judgment coming upon America, although they may come. Those with reprobate minds bring continual judgment on America through their own insane destructive choices. How do you turn a nation around when the reprobate minds say that they do not care about God –  just give us more bread and circuses? No nation can survive when the majority have been given over to a reprobate mind.