Catholicism appears to have a “form of godliness”; it looks “holy” on the outward appearance….but God is not a respecter of persons, He looks at the heart, the inward parts, not the superficial show…..that’s why Jesus made Himself of no “reputation”, but was humble and not handsome, that we should chase after Him like some Hollywood star. Likewise His earthly mother Mary, was never heard from again after being in the Upper Room receiving the Infilling of the Holy Spirit being one of the 120 devout followers of Jesus. Also, Mary had other children with Joseph after Jesus was born….so, Jesus had other siblings, half brothers. As the wife of Joseph, she did not remain the “perpetual virgin” Catholicism claims, nor was she perfectly sinless.  Jesus Christ was the only sinless human being who ever walked the face of the earth. The Bible is infallible, not the Pope, who changes his doctrine like people change their underwear. Jesus said, “Heaven and earth would pass away, but His Word would never pass away.” Woe to the man or woman who takes it upon him or herself to add to or take away from God’s Word! Here is one warning: “And if any man shall take away from the words of the book of this prophecy, God shall take away his part out of the book of life, and out of the holy city, and from the things which are written in this book” Revelation 22:19. We read in Proverbs 30:5, 6 “Every word of God is pure: he is a shield unto them that put their trust in him. Add thou not unto his words, lest he reprove thee, and thou be found a liar.”  This is a very serious admonition from the Sovereign Creator God. He means business….He want’s people to know and follow the Truth in the Gospel of Jesus Christ. Then and only then can we truly know what freedom is and be set free from the lies and deceptions of Satan and the men who follow him….

After nearly 2,000 yrs wouldn’t you think the Catholic Church would come clean, get it straight, (get honest before God and man), and admit their traditions and Mary worship are pure idolatry and cry out to God, the only Holy Father, for mercy, repenting of their many sins? Obviously, the Catholic Church has not repented. Pope Francis is in the news constantly continuing with the RCC’s false gospel and Marian worship, and dragging millions of Catholics with him into condemnation.

On the News that Matters Blog, ivarfjeld posted an article in 2011 on another Catholic Feast of the Immaculate Conception, a big time Catholic celebration honoring their false goddess,  during which Pope Benedict, who was the pope du jour of 2011, spoke more hypocricies concerning Mary, the mother of Jesus.  Do these so-called “infallible” pope’s make this stuff up as they go along? Do they really believe their own schtick, and expect their devoted followers to buy into it hook, line and sinker?

“The ‘Immaculate One’ reflects with all of her person the light of the ‘sun,’ which is God.”

How can any rational person miss the lie in that statement coming from a man, the Pope, the false “vicar of Christ” who leads millions?

Yet the Bible records differently. “While Jesus was saying these things, one of the women in the crowd raised her voice and said to Him, “Blessed is the womb that bore You and the breasts at which You nursed.” But He said, “On the contrary, blessed are those who hear the word of God and observe it.” Luke 11:27-28

Yes, on the contrary indeed! Who are we going to believe, the words of a pope and false prophet….or, the words of Jesus recorded in holy scripture. Jesus never gave inordinate honor to anyone, even to His own mother!

I especially liked the comments on Ivarfejeld’s article, one of which responded to a Catholic person’s argument very powerfully. It’s a post within a post! Hurray for him and all who contend for the Faith. Catholics may be offended, but I pray they will open their eyes and hearts to the Truth. It’s faith in the Truth which is in Jesus Christ alone, not illusions and traditions, which will determine our ultimate destiny.

“Dear England, do you think there is any love in catholic church at all? Let’s see your so-called catholic spiritual leader Pope Benedict is the former Hitler youth elected pope….

Catholicism’s ill-gotten children profess to know Christ but do service to Satan by disregarding the commandments of God in order to keep the traditions of men which papists even themselves call “TRADITION.” Why she (the whore) is called a mystery? The antichrist spirit of ancient pagan Babylon, though seemingly long fallen, lives in the rites and blasphemies of the Roman Catholic religion. Now that ancient Babylonian false religion lives today within the Catholic religion, disguised by Christian names. What a Satanic scam! The queen of heaven is now… Mary! Mystery Babylon lives, undetected by doomed millions across the world. Mary is NOT our co-redeemer!
“The children gather wood, and the fathers kindle the fire, and the women knead their dough, to make cakes to the QUEEN OF HEAVEN…that they may provoke me to anger” ―Jeremiah 7:18
Notice the Halo around Mary (especially her head). The is an idolatrous practice of the Catholics which symbolizes deity (that she is equal with God). The Babylonians practiced the same idolatrous worship to the Queen of Heaven. Mary is NOT deity; she was a normal every-day woman. Yes friend, Satan is definitely working in the Vatican and in Catholic organizations all across the world. Though most Catholics will deny worshipping Mary, the evidence says something very different! They bow down and literally pray in the name of “Mother Mary” to a graven statue of Mary. This is sinful idolatry! They are lying through their teeth. God makes CLEAR in His Word that He will NOT share His glory with another (that includes Mary).
“I am the LORD: that is my name: and my glory will I not give to another, neither my praise to graven images.” ―Isaiah 42:8

Hail Mary! Hail Satan!
How could anyone be so foolish to actually bow down in prayer to a statue of Mary, yet at the same time deny that they are worshipping her? Talk about crazy! God clearly command us in the second of the Ten Commandments NOT to make unto ourselves ANY graven images.
“Thou shalt not make unto thee any graven image, or any likeness of any thing that is in heaven above, or that is in the earth beneath, or that is in the water under the earth:” ―Exodus 20:4
Do the Catholics need glasses? It says right there in black and white in Exodus 20:4 that we are NOT to make unto ourselves ANY likeness of anything that is in heaven!!! Mary is in heaven. We are NOT to make any likeness of her according to Exodus 20:4. So what do you call a statue of mother Mary? It surely is a likeness of her, a graven image! Here’s another shocker…
“Thou shalt not bow down thyself to them…” ―Exodus 20:5
Ok, so then why does every Catholic BOW DOWN before a statue of Mary in their worship places? I’ll tell you why… because they are practicing FALSE religion totally void of the truth of God. You can argue whether or not you are worshipping Mary as your bowing down to her; but one thing is for certain, God has commanded us in Exodus 20:5 NOT TO BOW DOWN to her. Even if your not worshipping Mary, you ARE SINNING if you bow down to her because the Bible strictly forbids it! As I write, millions of people all around the world are bowing down to Mary in violation of God’s Word. Yes, Satanism is in the Vatican!
“Howbeit in vain do they worship me, teaching for doctrines the commandments of men.” ―Mark 7:7
“For false Christs and false prophets shall rise, and shall shew signs and wonders, to seduce, if it were possible, even the elect.” ―Mark 13:22

Roman Catholicism: The Cult of Mary

“Howbeit in vain do they worship me, teaching for doctrines the commandments of men.” ―Mark 7:7
“For false Christs and false prophets shall rise, and shall shew signs and wonders, to seduce, if it were possible, even the elect.” ―Mark 13:22
Pope Benedict is the former Hitler youth elected pope.” 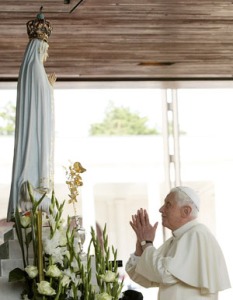 Pope praying to a statue of Mary with a crown on it’s head. I say “it” because it’s only a statue, a graven image.