If you’ve ever had this happen even one time, you will never forget it. I had, once. One way or another, there’s a reason for everything. In this case, a woman who was actually a witch started coming to the church I was going to. Very telling this woman happened to be a “friend” of the pastor. This woman singled me out to be the object of her special hatred: I could just see it from her eyes. No one called her out. I believe now this woman was using word curses against me. Then, one night as I was fast asleep…I woke up, groggy, but aware of an evil, sinister presense hovering over me, that was seeming to try to settle down on me. Very sleepy, I began to speak in my spiritual language, (tongues), and then drifted back to sleep. The next thing I knew, I was awakened again by this entity….I can only describe this as the most evil, malevolent presence I have ever experienced before or after. This time, I jumped up out of bed, fully awake, and pretty angry and in full spiritual warfare mode…speaking strongly in tongues and rebuking the enemy. I knew this thing was from Satan, but wasn’t sure why or what it’s agenda was other than to kill me. Afterwards, I have thought this witch was the cause and origin of sending it to hurt of kill me. Do I know for sure that a demon would have had the power to kill me? I believe it could happen if a person was not a strong Christian and living in some besetting sin. Bottom-line, Christians need to stop being in denial about spiritual realities. Many people like to make a joke about such things and slough them off as if they didn’t exist. They do exist. The Lord Jesus said so. He had to deal with them…He gave us the power to deal with them and He expects it of us. If we don’t, we can then expect to be harassed by the powers of darkness in one way or another.

Many of you reading this probably have experienced it at least once in your lifetime or know someone who has experienced it. You wake up suddenly from sleep and you try to move but can’t no matter how much you exert yourself. You may manage to slightly move your toes or some other body part but it is a struggle and you still can’t move your body. During an episode you may perceive an evil, malicious presence. You may feel utter dread. You may also have actually seen a shadow person or a shadow person with a hat or some other evil, demonic looking entity. You may have experienced some entity sitting on your chest or had an episode accompanied by an entity doing sexual things to your body. Some people have reported having someone’s hands over their neck choking them. Some have had heard mocking laughter. 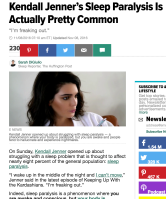 Lately, it has received…